APISecurity.io provides API developers the much needed single source for up-to-date and relevant information around API Security which has not really been available until now.

The APISecurity.io effort is one of the projects lead by a new member of the 42Crunch leadership team, Dmitry Sotnikov. Dmitry joined 42Crunch as the Vice President of Cloud Platform. Prior to joining 42Crunch, Dmitry has led the cloud efforts of WSO2, was co-founding the Jelastic platform-as-a-service where he served as the COO, and was Director of Cloud at Quest Software.

Dmitry is also overseeing the launch of the upcoming software-as-a-service (SaaS) version of the 42Crunch API Security platform. The platform covers the whole spectrum of the 42Crunch technology, from reviewing the security of the OpenAPI definitions and live API security testing to real-time API protection with an API micro-firewall, all available in the cloud.

“We are excited to have Dmitry join our team,” says Jacques Declas, the co-founder and CEO of 42Crunch. “Dmitry brings with him years of experience building highly scalable and highly available cloud services that will help establish 42Crunch as the only cloud-based API Security platform for the enterprise. I am also excited to launch APISecurity.io, a free service to all API developers around the world and the single source of information and tools.”

“API security is a hot market,” says Dmitry. “Applications and devices increasingly expose and rely on APIs, and Gartner estimates that by 2022, APIs will become the most common attack vector. 42Crunch has the technology to accurately and systematically define, apply, and enforce API Security at scale, and it has been named as Gartner Cool Vendor. My job at the company is to scale the know-how of 42Crunch and expand its reach within the industry.”

Founded in London, UK, with offices in Dublin, Montpellier, France, and Irvine, California, 42Crunch provides a security platform that automatically generates and enforces risk-based security policies on enterprises’ APIs. The cloud solution addresses the most demanding API security requirements for enterprises around the world. The 42Crunch API Security platform also fosters the collaboration of security, development, and operations teams, and provides a DevSecOps approach to API development. Visit https://42crunch.com to learn more.

Trademarks and registered trademarks are the property of their respective owners. 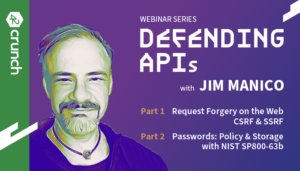 Empathy for the API Developer

Colin Domoney from 42Crunch, in his recent article on DevOps.com, addresses the disconnect between development and security teams and explains the key challenges facing developers in creating secure API code. Better understanding of the challenges on both sides can help create greater empathy which in turn can help […]